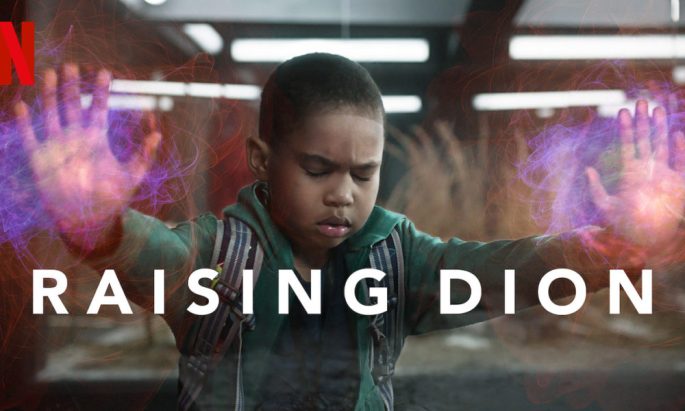 Raising Dion can be found on Netflix. Although I enjoyed the first 9 episode season, I can see how adults would not want to invest the time to watch this show. Raising Dion is made primarily for kids, in elementary, early middle school, or for adult big kids like myself who just like a decent superhero yarn. Dion (Ja’Siah Young) is a 7 year old boy, whose father allegedly drowned under some strange circumstances. Dion is raised by his mother Nicole (Alisha Wainwright), who is struggling to keep the household and job together, while she mourns the loss of her husband Mark (Michael B. Jordan). Dion begins to manifest special abilities and his mom, is not sure how to handle it. Nicole eventually turns to her deceased husband’s best friend, Pat (Jason Ritter) who watches over Dion as the godfather, and ensures that Dion has a father type figure in his life. Just like any superhero show, if there is someone with budding superpowers, then of course there has to be a villain, and Raising Dion does not disappoint in this area either. I found the villain concept to be rather creative and intriguing, and it has a pretty good payoff at the end of the season. The show is definitely about Dion, but to me the focus is on Nicole and her difficulty accepting the reality of her situation, and that life is much more complicated than it already is. As much as I enjoyed watching this series, and my wife enjoyed it too, I did find Dion and Pat the godfather to be rather annoying at times. Despite these annoyances, and the kid friendly approach, I found it to be engaging, and very interesting towards the end. However, would I recommend you purchase a Netflix subscription just to see Raising Dion? No! SAVE THE CASH AND MAKE THE DASH! Grade C+.